In 2017 we had the pleasure of meeting the Royal Enfield team, we’d been subtly pitching them the idea of custom built rally spec. support vehicles for ‘The Great Malle Rally’ ever since and suddenly they said ‘let’s do this’! The brief was set to create 2 rally machines to support 100 very inappropriate custom/classic motorcycles on our 1250 mile 5 day/stage rally across all of the most wild landscapes in mainland Britain. We wanted to create a very specific tool for a very specific job.

The 2019 Royal Enfield Interceptor 650 Twin was the perfect start for the heart of the build; light weight, fast, fun, easy to modify and with a beautiful engine at its core. The Malle founders borrowed a stock Royale Enfield Interceptor for a field-test in Portugal, so we could really get a feel for the machine. After thrashing the bike over 1000 miles in 3 days (200 of those miles off-road – on basic road tyres), we had a pretty good grasp of what the stock bike could do and what it needed modified for the rally and for our engineers.

For the builds we worked closely with the Industrial Design team at Royal Enfield in the UK and on monthly trips North from Malle HQ we’d share ideas and sketches – the first of which had military aerials and helium balloons to be used as rally checkpoint beacons, as well as a full un-zippable seat that housed a full tool set – it would be have been horribly uncomfortable riding 2000 miles sitting on a full sprocket set!

Once we had developed the first Malle pencil sketches into a fully formed concept we started stripping the bikes down with the Royal Enfield team convinced friends and collaborators to loan/fabricate us some very specific parts. Our friends over at British Customs were on board immediately and although they’ve typically made parts for custom Triumphs in the past, they set up a jig and made 2 sets of custom exhausts that just slipped right on to the 650 Twin. We also used British Customs heavy-duty Grabber foot pegs and Mule Tracker handle bars.

Rally tools, kit, supplies and usability were at the centre of this design, we needed a motorcycle that could carry full Malle Moto Panniers of tools (20KG on each side), one side with metric, one side imperial, with Rally checkpoint kit in the large Malle Moto duffel, amongst spare fuel tanks, cables, consumables (zip ties, duck tape etc.) and the personal effects of the engineer. So each set of tools is packed into Malle dry bags on the inside of the panniers, making all kit full waterproof and air tight against dust and dirt.

For a support vehicle, lighting and safety are crucial. In the Malle tank/tail pack, you’ll find 5 USB charging parts for phone, GPS and torches, for the lead engineer and to support riders he may be supporting, as well as a full first-aid kit, water and food. PIAA were the lighting partner of choice and supplied us with extra large twin front lights, dual oversize fog-lights and large modified tail-lights (we added the transparent red lens on the inside). Each of the side/rear lights can be rotated to act as a spotlight for the engineer to direct light onto the motorcycle they are working on in the rally.

Most of the terrain we’re crossing in The Great Malle Rally is tiny single track B-Roads, so it is technically road, but also loose gravel mountain tracks and often small rivers burst their banks and spread deep mud across many of the lanes in the South West, the unpaved roads up in the North of Scotland are also more fun with a little more grip. So we lifted the entire bike by a few inches with modified upside down WP forks, extended the rear shocks and used Heidenau K60 Enduro Tyres. The new forks meant new yokes, so Harris Performance fabricated a pair of beautiful yokes and a really heavy-duty aluminium bash guard. We also added more engine guards, to protect the engine and house additional fog-lights. All the rally kit is fully protected, organised, water-proof and ready for the task in the 4 piece luggage set.

All of the Malle luggage is made from our British waxed canvas (made by the oldest waxed canvas mill in the UK since 1776), we selected our standard matt black for one bike and then a new Red 10oz for the lead engineers bike, for greater visibility. Within each piece is a fully waterproof membrane and quilted padding, which was replicated on the custom waxed canvas seats. The tanks and oil boxes have been hand painted with the contoured relief map of our two favourite roads/passes in the Rally. On the Red ‘Malle Rally Royale’ #02 we hand painted the relief map for the Applecross Pass in Scotland and on the Black #01 it has the relief map of the Hard-Knot Pass from The Lake District in England. The Royal Enfield team went to town with the paint job, several post 2am nights in the spray booth to get those perfect.

‘The Malle Rally Royale’ machines will be used by our engineers to support The Great Malle Rally 2019 and beyond.. 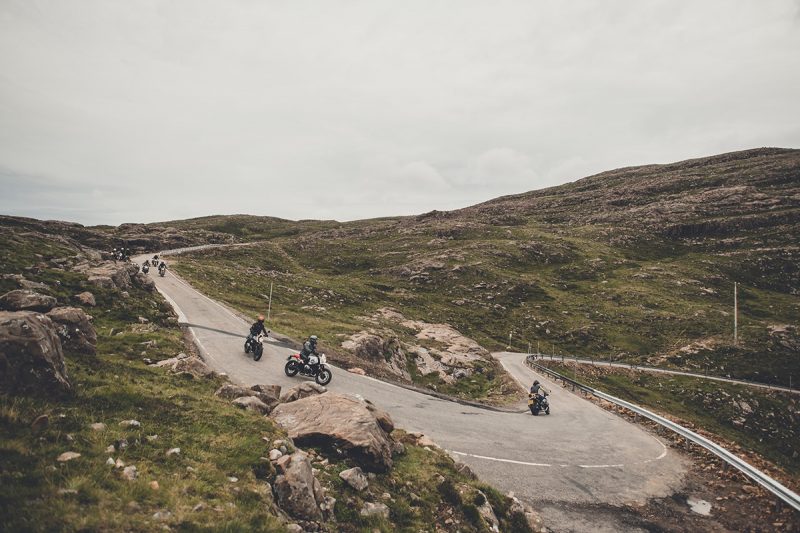